Pacific Title & Art Studio, the company founded in 1919 by Leon Schlesinger has been sold. The original business of the company was to supply motion picture studios with title cards. In the era of silent films this was very profitable because every film released required dozens (perhaps hundreds) of inter-title cards to display the dialog to the audience.

When talking pictures became all the rage in the late 1920s, the need for inter-title cards began to decline. With the establishment of his cartoon studio, Schlesinger was able to shift some of his focus to supplying Warner Bros. with sound cartoons. Beyond the fact that they now had entertaining cartoon shorts to show before the feature films, it also enabled Warner Bros. to capitalize on their growing music catalog with the Looney TUNES and Merrie MELODIES shorts that Schlesinger produced for them!

Pacific Title remained in the business of titles and end credits -- supplying the titles for thousands of films, including Gone with the Wind and Ben Hur. In the early 1990s their scope was expanded with the establishment of Pacific Title Digital. Their business now includes digital compositing, visual effects and film restoration.
Posted by Joe Campana at 4:13 AM No comments:

In the coming days I will have three additional posts to complete the identities in the "Animators at Play" Disney softball game.

For the remainder of the year we'll have several Centennial Birthdays to celebrate, including Virgil Ross, Dick Lundy, Roy Williams, Volney White, Art Babbitt, Al Coe and Les Clark. Hardie Gramatky, Dick Rickard and Cecil Surry are coming up in April. I have to admit March was an unusually busy month for 100th birthdays!

On April 3rd I will have a very special post -- a fifty year old multi-page document.
Posted by Joe Campana at 11:38 PM 1 comment:

In case you're not aware, Disney released a fantastic bit of historical film footage on the Disney Treasures DVD, "More Silly Symphonies." The segment is titled "Animators at Play," and it is a few minutes of film shot in the winter of 1930/31 during a lunchtime softball game in the lot adjacent to the old Disney Studio on Hyperion Avenue. This segment can be found under the bonus features on disc two of the set.

On this piece a cursory attempt was made at identifying the people on the film. Unfortunately this is near impossible to do as a commentary while film is running and Leonard Maltin does a good job, but the information is spotty and in a couple cases, incorrect.

While viewing this with friends, I was able to point out other people I recognized in the footage and began to made some notes. With some frame grabs I'm able to identify most of the people in these stills. If you can identify anyone who isn't named (or an error in mine) please let me know. Below are the first few. More in coming days.
(click on the images for a larger view) 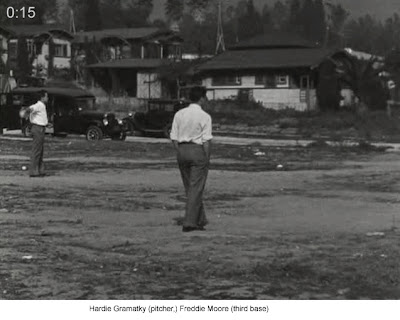 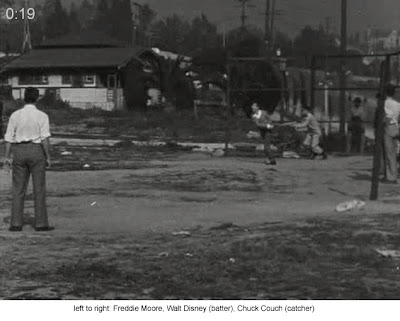 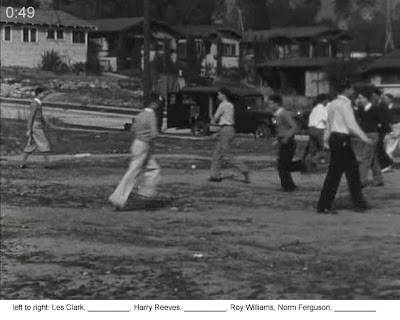 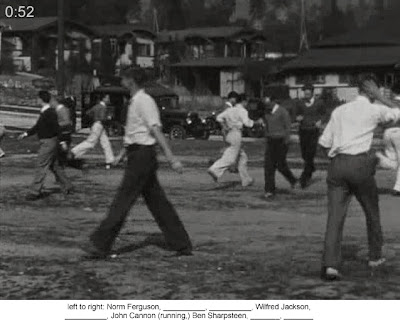 Leigh Adrian Harline, the youngest of Carl and Matilda Harline's thirteen children, was born March 26, 1907 in Salt Lake City, Utah. He received music training from J. Spencer Cornwall, conductor of the Mormon Tabernacle Choir and following his graduation from the University of Utah, he began working for a string of radio stations. 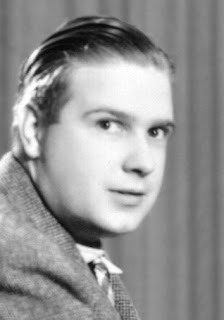 His radio work sent him to San Francisco and, by 1929, to Los Angeles where he was music director and announcer at KHJ radio. He went to work at the Walt Disney Studio in 1932 arranging and scoring animated shorts. As Disney began production of his features, Harline was enlisted to write songs along with Frank Churchill and Paul J. Smith. His most famous composition, When You Wish Upon a Star, was written for Pinocchio and the following year he received an Academy Award for it and another for the film's memorable score.

By this point Leigh had started also working for Columbia Pictures, scoring several features a year, among them the films of the "Blondie" series with Penny Singleton and Arthur Lake. He did his last work for Disney in 1941 with his music for the Pluto short, The Sleepwalker. Over the next twenty years Harline was recognized by the Academy with five more nominations for the Best Music Oscar. In 1947 he was commissioned to write an orchestral work for the centennial of the settlement of Utah. He later wrote the musical scores for two well-known films for the Church, Man's Search for Happiness, and In This Holy Place.

From the late 1940s he worked almost exclusively for 20th Century Fox but he also composed for Paramount and later MGM. In the mid 1960s he worked on several television shows and he even was involved with music for a New York World's Fair film.

Leigh Harline passed away on December 10, 1969 from complications of throat cancer.
Posted by Joe Campana at 8:08 AM 4 comments:

John William Cannon was born on March 17, 1907 in . At the time, his father was working as a switchman for the railroad.

His parents, John and Maybelle, had married in 1906, and they had three sons; Johnny, Guy and Maurice. By the time Johnny was eleven, his parents had divorced. His brothers were taken by their father to live with their grandmother in and Johnny stayed with his mother. 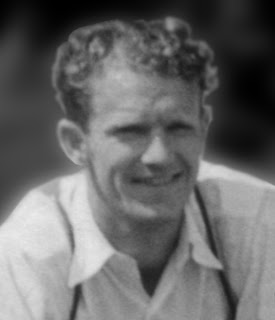 While in his late teens he moved to and lived just a few steps from the beach on in near .

He was hired at the Disney Studio in 1927 to work on the Oswald cartoons. In 1928 Charles Mintz pulled the Oswald contract and a majority of the artists departed, Johnny was among the few who stuck with Walt. He wouldn’t have know that Mickey Mouse was about to make his appearance.

He was promoted to animator on the Mickey Mouse shorts and it seems that he remained on shorts throughout his time at Disney’s.

Following his departure from the Disney Studio in 1940, it is not known where he worked, but he was an artist at one of the studios when, sadly, he suffered a fatal heart attack on December 6, 1946.

Note: Cannon is among those featured playing softball in the rare footage recently released on the DVD set, “More Silly Symphonies” In Leonard Maltin's commentary he is said to have been thrown out at second base (although it is clearly not Cannon! -- it is in fact, Hardie Gramatky.) Cannon can be seen later in a challenge for a bat with director Jack King.) In a few days I will be posting a detailed listing of the softball players.

Thomas A. Johnson was born on March 14, 1907 in New York to parents Calvin and Daisy Johnson. He had an older brother, Richard and a younger sister, Rose. He lived in the Bronx until he migrated to Miami when the Fleischer Studio headed south. 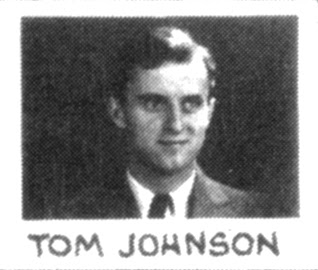 Johnson seems to have spent his career on the east coast. He began as a newspaper cartoonist and made the jump to animation in late 1930 when he took a job with Max Fleischer. His work started with the "bouncing ball" short subjects, but eventually graduated to work on Betty Boop and later Popeye shorts. He animated on the features Gulliver's Travels and Mr. Bug Goes to Town and stuck around when Fleischer's was transformed into Famous Studios when Paramount took over production.

He remained animating for Famous until is death in September, 1960.

UPDATE! (Aug, 26, 2007)
Michael Sporn has posted some late-era Johnson artwork and a lengthy biography for him on his blog (err, Spolg) from a 1939 Fleischer Animated News. It can be reached by clicking HERE and scrolling down to the bottom of the post.

Robert J. Bentley was born on March 11, 1907 in . He entered the animation scene in the late 1920s as an assistant, by the mid 1930s he was a full-fledged animator in working in Frank Tashlin’s unit at Leon Schlesinger’s studio. Bentley moved to in 1938 (along with several others from ) to work on the Fleischer feature Gulliver’s Travels. He returned by 1941 to work at Walter Lantz’ Studio.

In the mid 1940s he jumped to MGM where he worked under directors Tex Avery and Dick Lundy. By the early 1950s he was bouncing between Paul Smith’s unit at Lantz and MGM. He settled back at Lantz in mid 1954 and remained there until late 1959. The 1960s and 1970s saw him at Hanna-Barbera, Filmation, Ed Graham and DePatie-Freleng.

He passed away at the Motion Picture Home in Woodland Hills on November 28, 2000 at the age of 93.


There is an interesting branch in Bentley’s family tree that may have had some influence in his career choice; his mother, Hannah, married early animator Les Elton (Leslie Elton Brownley) after his father’s death. This may have raised a few eyebrows because she was about the same age as Les’ own mother when they married in 1922. Moreover, Elton’s two sisters were also married to animators! His sister Dorothy was married to Vaughan Kaufman and his sister Charlotte to John McManus, later an animator at Disney. 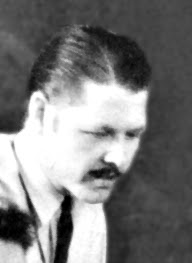